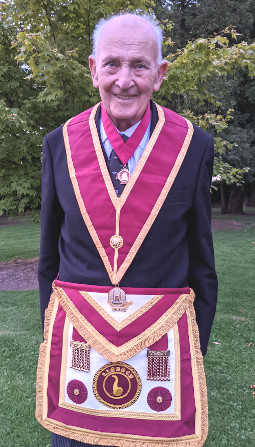 On 9th September the members of the Court of Hyrnecastre No 102 gathered via Zoom. In attendance was Bro Bob Smith, recently turned 85 and planning a tandem skydive in support of the Craft Province of Lincolnshire festival appeal.

Unbeknown to Bob, the RW Provincial Grand Master RWBro Tony Burke was in attendance and in recognition of Bob's efforts conferred a field promotion to the rank of Past Provincial Grand Burgh, Bob being invested with his regalia by WBro Michael Carter, whose internet connection he was sharing for the Zoom meeting! A further surprise and honour was conferred by the MW Grand Master, MWBro Paul Johnston, who also joined the meeting. In further recognition of Bob's outstanding commitment to the principles of freemasonry he received nomination as a Knight of the Ancient Masonic Order of Alfred the Great, this accolade to be formally conferred as soon as meetings can resume safely.

Further news of Bob's jump will be posted as soon as the weather allows it to proceed.