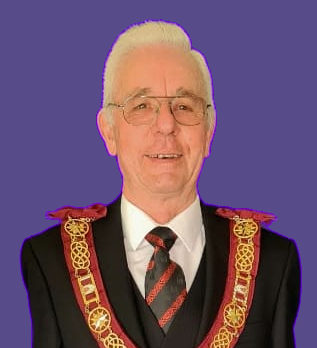 On Saturday 10th April, R. W. Bro. Michael Carter, KAG was invested virtually as the PGM for the Province of Lindsey, which covers all Yorkshire and Lincolnshire.

Michael was born in Horncastle, Lincolnshire in 1947 and initiated into masonry at Olive Union Lodge 1304, Horncastle in 1992.

In 1996 he was exalted in the Banovallum Royal Arch Chapter 1304, Horncastle.

In 2014 he was instructed into the Masonic Order of Athelstan in the Court of Hyrnecastre No 102, Horncastle.

The offices Michael has held within the Masonic order of Athelstan are:

Michael was announced as Provincial Grand Master for the Province of Lindsey on 6th March 2021, with immediate effect, by the Grand Master. He was invested by the Grand Master virtually during a Zoom meeting held on Saturday 10th April 2021. We wish him all the best in this prestigious office.